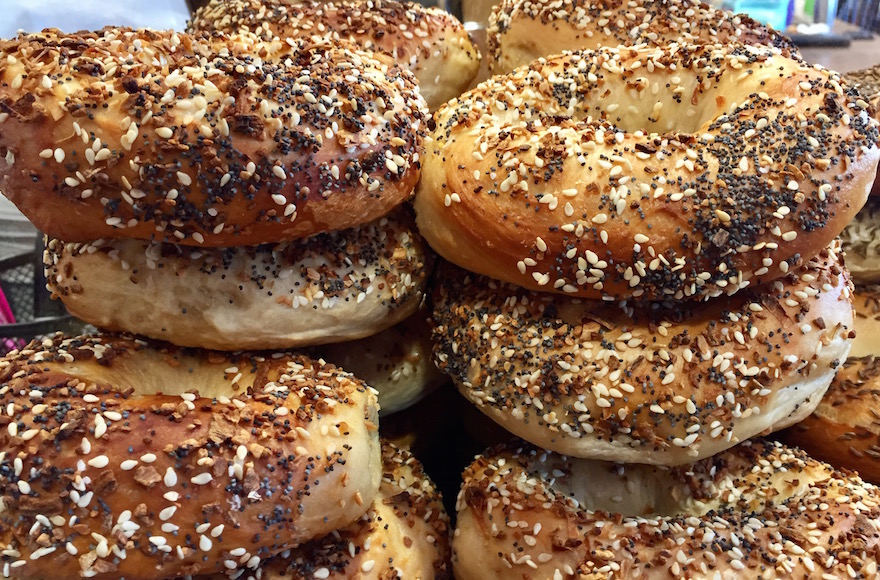 KANSAS CITY (JTA) – Bronx-born, Queens-bred attorney Victor Bergman has lived in the Kansas City area for more than four decades — and in all that time, he hadn’t found a true New York-style bagel. “Boiled first, glossy crust, soft interior — I really missed it a lot,” he said.

But here, in a suburban strip mall that shares its parking lot with a Walmart, Bergman’s 40 years in the desert may be over: “They’ve done it,” he said, awaiting a fresh-baked dozen. “These are the bagels I grew up with.”

Actually, it’s meshuggah — Yiddish for “crazy” — as in Meshuggah Bagels, Kansas City’s bagel-and-schmear joint that has been on a holey roll since owners Pete and Janna Linde first set up shop last year.

Meshuggah is the only standalone kosher eatery in Kansas City — a boon for the modest population of observant Jews. It has also become very popular among the city’s growing foodie crowd: The bagel bakery will boast three area locations by the fall.

Surveying the line of customers that stretched to the door on a recent Wednesday morning, Pete told JTA that they never expected to start a bagel boom. As a New Jersey native, he just wanted a taste of home. Meanwhile, Janna, a lifelong Kansas Citian, had always thought a bagel was just bread with a hole in it — until that day in Central Park a few years ago, when the couple shared an everything bagel with whitefish salad they had purchased on the Upper West Side.

“I bit into it, and I realized I had never had a bagel — not a real one,” Janna recalled. “I looked at Pete, and I said, ‘Wow, that is just crazy good.’ So even then, we had our name.”

For years, the couple joked about opening a bagel bakery, said Pete, whose mechanical engineering career brought him to the area 20 years ago. “It was seemingly ridiculous that Kansas City didn’t have a real bagel anywhere,” he said.